Uelzena has received the results from the first survey on the sustainability module milk; they provide a preliminary but constructive overview of the sustainability performance of milk producers. On the basis of these findings, the company is developing a continuous improvement process.

The Uelzena Group and their member dairies are participating in a three-year pilot project of the sustainability module milk which will run from 2017 to 2020. At the end of the project, the Thünen Institute will process and publish the final results from the data surveys. In total, nearly 7500 farmers from 34 dairies throughout Germany took part in the pilot project phase.

At the same time, the Thünen Institute sent an interim and final report to each of the participating dairies, which summarises the responses of the farmers by dairy. Uelzena also received this report. It shows the results from the first phase of the project and reveals many good sustainability achievements of the milk producers of the Uelzena Group, while also identifying potential areas for improvement. Some results and the underlying issues do not seem plausible and, following the pilot phase, have now been discussed together with the Thünen Institute and other industry partners in various workshops. Some criteria and questions will be dropped in the second project phase and will be replaced by new ones.

So far, data has been collected from 443 milk producers in six member dairies of the Uelzena Group – this equates to about 52 percent of its milk producers. The results of the pilot phase provide an impression of the sustainability performance of the Uelzena Group. However, the company has already been using the knowledge gained from the 2019 interim results: A continuous improvement process (CIP) has been established. The poor results in particular were used as a starting point for future improvement measures.

Good scores for our farmers on the subject of animal welfare: The majority of cows (98 percent) are kept in modern free stalls with lying places where the animals have enough space to walk, eat and rest. The predominant type of husbandry is free stable husbandry in combination with pasture walks. In 95 percent of the stables, the cow-to-feeding place-ratio is good (21 percent) or very good (74 percent).There is virtually no tethering of animals anymore. Only two percent of Uelzena’s milk producers tether their cows in the stalls - however not all year round, but mostly in combination with pasturing. Anyway, this is a form of husbandry that will continue to lose its significance as a result of structural changes.

Brownie points for climate protection: As of today, 58 percent of agricultural enterprises are already generating renewable energy on their own farms or are involved in a joint facility. However, the Uelzena Group does not want to rest on its laurels; we are actively pursuing further ways of reducing CO2 emissions. One of these includes the reduction of cows’ methane emissions, i.e. natural greenhouse gas emissions. A promising approach is a newly developed feed additive that is said to reduce the methane emissions from enterogenic fermentation (the digestion process) by 30 percent. However, this feed additive is still going through the approval process.

Strong investments: The vast majority of companies (85 percent) invest in modernisation - which can be seen as an expression of confidence in their own economic success. This is a continuation of a long-term trend that has been observed for decades: The herds per farm are getting bigger and the farms are working more efficiently, which leads to a steady increase in overall milk production despite the fact that some farms are continuing to terminate their businesses (3 to 4 percent per year).

„Sustainable agriculture is and must be a matter of course. The questionnaire provides the opportunity to document sustainable management, to make it comprehensible to others and to assess it.” 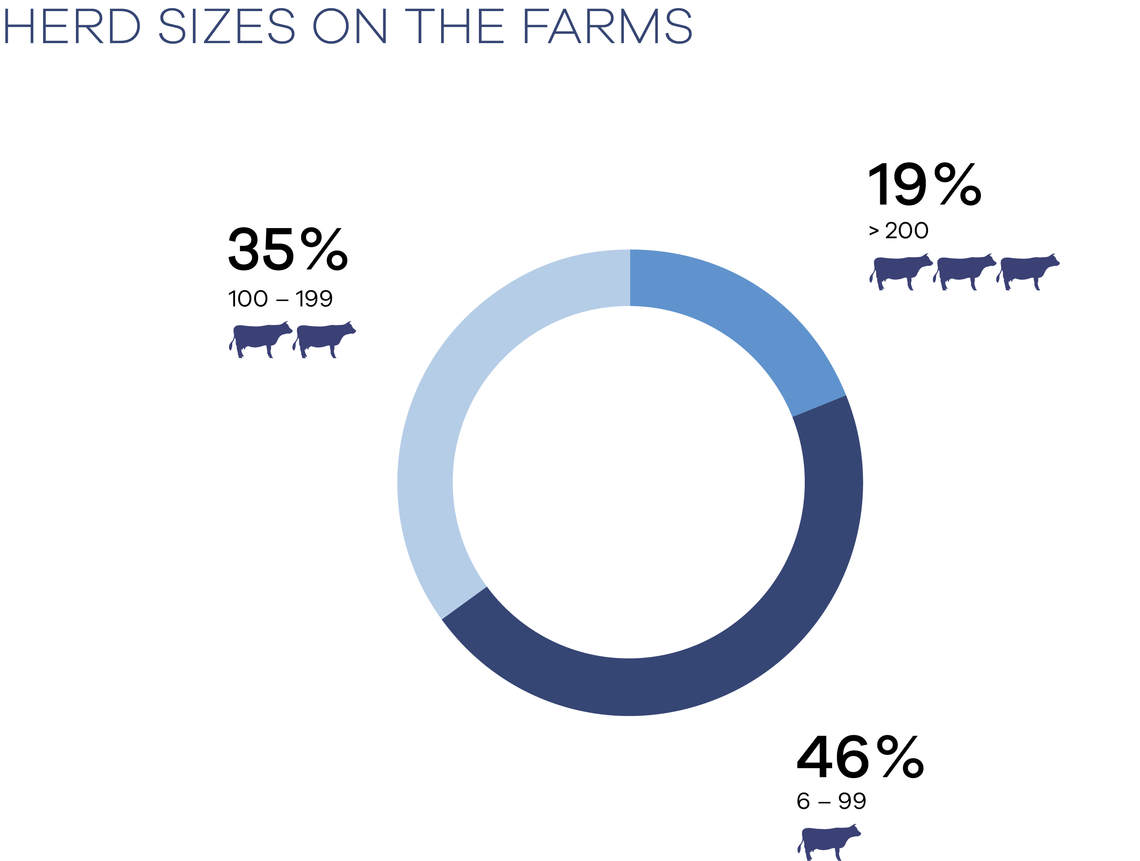 Problems with the handling of antibiotics: 62 percent of the farms have no targeted approach for the treatment of dry cows with antibiotics. A “dry period” means that lactation is stopped and the cows are not milked during that time. This period is accompanied with a high risk of new infections such as mastitis (udder inflammation), which is why many milk producers use antibiotics as a preventative measure. In addition, 17 percent of the farms use antibiotics for udder diseases without an antibiogram. Antibiograms are laboratory tests performed to determine the sensitivity or resistance of pathogens to antibiotics. Uelzena intends to raise awareness and encourage improvements amongst its milk producers through a series of information and training events on animal welfare and animal health assessment issues.

The economic situation in 2017 was perceived as difficult: At the time of the survey, about 72 percent of the farms stated that they were dissatisfied with economic aspects of the milk sector. This negative assessment is due to previous unfavourable financial years. In 2015 and 2016, the milk payout was less than 30 euro cents per kilogram; in previous years it was between 32 and sometimes more than 37 euro cents per kilogram. There will always be major fluctuations in milk prices which neither the market nor the Uelzena Group can prevent. Uelzena will discuss with its members what additional contribution the dairy can make to improve the economic situation of milk producers - in addition to a competitive milk price payment.

Nutrient management under observation:  Nationwide results show that nutrient management is a field with much more room for improvement. 27 percent of the farms state that their nitrogen balance (N balance) is unbalanced. More than a fifth (22 percent) of the member farms do not have the nutrients (N, P and K) in their liquid manure analysed – nationwide, this is almost half (47 percent) of the farms. In addition, 39 percent of the farms do not take the crude protein content (XP) into account in their fertiliser schedule. Uelzena will observe what impact the stricter fertiliser ordinance of May 2017 will have and whether the values will improve in the future.

To further expand the database, voluntary participation in the survey will be heavily promoted within the Uelzena dairies. In the second half of 2019, the evaluation of the first survey will be revised. From mid-2020 to early 2021, the survey and evaluation will be repeated in order to highlight any changes achieved by the milk producers by themselves or with supportive measures from the Uelzena Group.

GENERAL INFORMATION ABOUT THE 443 SURVEYED FARMS

What do you think about our sustainability reporting 2020?